I'm just so happy for [BLANK]! 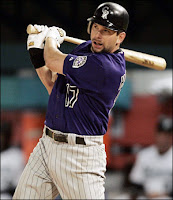 Every year, there seems to be a veteran that has never won a World Series ring that people like to root for.

I remember the joy felt for Paul Molitor when he finally won a ring for Toronto and for Red Sox fans, seeing stars like Pedro and Manny and mainstays like Tim Wakefield made it all the more special in 2004.

This year you have Kenny Lofton, who has been traded so many times that he is part of a bizarre DHL ad that he doesn't even appear in. This will be his 11th postseason since 1995... and somehow he is still ringless.

And you have heard a lot about Todd Helton, who has been stuck in Colorado his whole career and finally is having that be a good thing.

If neither Lofton nor Helton's story catches your attention, here are the other players in this year's post season who have been in the majors for the past 10 seasons looking for their first ring: