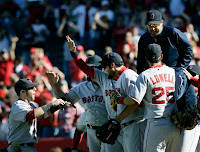 Kept them scoreless for 25 out of 27 innings... and had Papi and Manny's bats going.

Oh the anti-Red Sox articles are already coming out.
"They swept a team that was banged up... big deal."

How about "They did what they were supposed to do!"?
They played a team that was banged up and swept them out of the ballpark.
They shut down their lineup and smacked the pitchers around.
What were they supposed to do?

If they lost a few games, the word on the Sox was they weren't taking care of business.

Oh well... onto the ALCS. Ortiz looks great. Manny looks great. The pitching looks great... and good job by Francona for putting in Gagne and giving him a feel good moment (a 9-0 is the only lead I would ever trust with Gagne!) 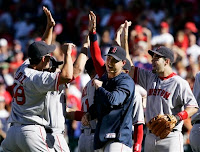