Guess what... the playoff system works! 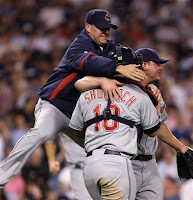 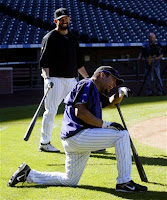 I don't want to hear any complaints about how the baseball playoffs aren't fair.
I already covered how there is more variety in the playoffs than in the NFL but let's take a look at the 4 teams left in the playoffs.

You have the two teams tied for most wins in the AL (Red Sox and Indians) going for the AL championship.http://www.blogger.com/img/gl.link.gif

And then you have the two teams tied for the most wins in the NL (Rockies and Diamondbacks) going for the NL championship.

That's pretty cool!
We are assured the best teams are playing, thus not having another year where the regular season was rendered near obsolete.

And for the myth that only the highest payroll teams can win... there is only one team, the Red Sox in the top 22 payrolls.

Think about that... after all the bitching and moaning about how small budget teams can't compete... 75% of the remaining teams are from the bottom 8 payrolls.

And the remaining one is the new Evil Empire.
Posted by Sully at 2:33 PM