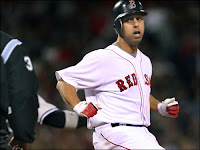 Before the playoffs started, I listed the players on the active rosters with 10 years of big league experience and no rings.

The Cubs had the most and they will start next season ringless as well.

With Julian Tavarez mercifully not on the Red Sox post season roster, the only active player on the Boston roster with 10 years in the show and no ring on his finger is Alex Cora.

I know he isn't a beloved local All Star like Todd Helton or an oft traveled solid veteran returning home like Kenny Lofton... but he's a nice role playing infielder who has filled nicely in second and short during the year.

How about letting him play a game, Mr. Francona?
Look, far be it for me to complain about ANYTHING this post season... especially with the Red Sox 4-0 so far and winning each game by an average of 7 to 2.

But let him in one game... as a pinch runner. Hell tonight, Papi got a double in the 8th. Why not bring in Cora to run then? Or in the 9-1 clincher against the Angels, have him play shortstop in the 9th?

I know this sounds odd, but this is coming from a guy who sat on the bench all through high school... just waiting for a blow out for me to make a pinch hitting appearance.

Maybe I feel for Alex sitting on the bench while the team steamrolls.

Maybe he doesn't care.
I guess when your team is winning every game by 5 runs, you need things to root for.
Posted by Sully at 10:19 PM