Don't talk to me about NFL parity 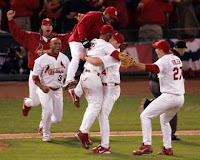 When you hear people talk about how football is better than baseball, one thing I hear is "You always have the same teams in baseball winning it... but in football ANYONE can win it!"

And people repeat that over and over again... so it must be true.
Right?

Since 2000, there has been a different World Series winner every single year.
Since 2002 we've had 4 different Super Bowl champions, with the Patriots winning 3 times.

In that same time only one team has even made the World Series twice.
Guess which team?
Nope, not the Yankees... not the Red Sox.
The Cardinals (2004 and 2006.)

And now we have 8 playoff teams lined up and only the Yankees are back from last year's playoff. 7 out of 8 teams in the playoffs this year were not in it last year? How is this "the same people every year?"

In that same time, there were 16 repeat playoff teams in the NFL, including the conference title game regulars Patriots and Colts who were in the playoffs every year.

Compare it also with the NBA, another salary cap team. Year in and year out... the Pistons, Heat, Spurs, Mavericks, Suns and Lakers are the big teams. When a Warriors or Cavaliers sneak it, everyone is stunned.

So please... if you like football better, fine.
But spare me any discussion about how "unlike baseball, every team in football has a shot."

Repeating it doesn't make it true.
Posted by Sully at 9:18 AM