Can you imagine if we went back in time? 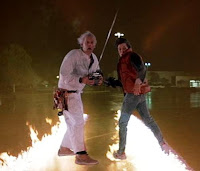 I'm not even talking about a big trip... just a month back.
If I told the baseball world on September 19th what would be happening, they would think all hell had broken loose.

And in a way it had.


Back on September 19th, the Yankees had closed to within 1 1/2 of the Red Sox and looked like they were going to be unstoppable in October.

The Red Sox had lost 2 of 3 at home to the Yankees, were on the verge of being swept by Toronto and had everyone screaming 1978.

The Angels were cruising and had tied the Indians for the best record in baseball. The consensus that facing the Angels in the first round would spell certain doom for either the Red Sox or the Yankees and it was the Indians who was the preferred first round opponent.

Only a game separated the Cubs and the Brewers and programmers at TBS were salivating at the prospect of a Cubs/Mets NLCS for their maiden voyage of playoff coverage.

The Rockies had a modest 3 game winning streak, but the last two were against the Dodgers. Most people saw those games not as a sign the Rockies were competitive but rather that the Dodgers couldn't get out of their own way. My God, even the ROCKIES were now ahead of the Dodgers in the standings.

And now look at it...
Both the Angels and the Yankees whimpered out of the playoffs. The Angels didn't even put up a fight, while the Yankees avoided a sweep because of a Johnny Damon homer only to be mauled in a 6-4 elimination loss at home that was not as close as that score would indicate.

The bumbling Red Sox did NOT cough up the division and the scared Indians stormed into the ALCS... where they very well may slay the two economic giants of Boston and New York en route to an unlikely pennant.

But that is as predictable as the sunrising compared to the National League.
The Mets and Padres... both the consensus picks for the NLCS... both tied in the loss column for home field advantage... both missed the playoffs entirely.

And the Colorado Rockies became a juggernaut that is envoking comparisons to the Big Red Machine.

Can you imagine if I went back a month ago and said the Rockies... a third place team on the verge of slipping back to fourth with San Diego and Arizona on its schedule... would become an unstoppable force?

If I said "Man, can ANYONE beat the Rockies or are they just going to win this whole thing outright?" I would be institutionalized.

And such is my desire to bend time and space to talk more baseball!