Well... at least my dad is happy the Rockies won

I told my dad that I was rooting for a 7 game NLCS, thinking he would agree with me. My dad is a big Giants fan and follows the NL West closely, so why wouldn't he want the Championship Series to come down to a Game 7 showdown.

So I was surprised when he said to me "I want the Rockies to sweep."

At first I thought he was getting swept up in the feel good story of the Rockies winning 19 out of 20 games.

But then I remembered... there are some baseball names that should never be mentioned in the prescience of my father. (And I'm no different... just try to say the words "Don" and "Zimmer" with me in the room and watch me turn red.)

Well, the Diamondbacks have one of those people for my dad.
My dad has been a loyal Giants fan since before the days of Willie Mays. He hasn't seen the Giants win a World Series since 1954 when he was... well... a lot younger than he is now.

The Giants had no better chance to win it all than 2002 in the World Series with the Angels. The Giants blew a 5-0 lead in a potential clinching game 6 but there was still a game 7 to play. Dusty Baker had two pitchers to chose from for game 7:

16 game loser Livan Hernandez who got clubbed in game 3 by the Angels.

Guess who Baker chose? Yup, Livan.
His decision was partly based on his "big game background" and he was indeed the NLCS and World Series MVP for the Marlins in 1997.

But his 15 strikeout performance in the NLCS was aided by the fact that Eric Gregg's strikezone 14 feet wide and 28 feet high.

But Livan got the game ball... and from the first inning it looked like a horrible idea.

In the first inning he walked two, let up a sacrifice and got out of the inning without a run only because David Eckstein was caught napping and doubled off at second on a line drive to center.

Anyone watching the game saw he was wild and getting hit hard. It was the luckiest scoreless inning. I thought "OK, bring in Reuter and have him pitch NOW!"

Even McCarver and Buck were commenting "They can't keep Hernandez in here much longer."

The Giants scored in the second on a Sanders sacrifice fly and now there was a lead to protect.

Livan coughed the lead up the very next inning. The score was 1-1 after 2... and it was clear to anyone watching that the Angels were literally licking their chops walking up to the plate.

For some reason that historians, philosophers and poets for generations will never be able to figure out... Hernandez came out to start the third. He didn't retire a batter.

The next inning Reuter started.
He pitched 4 innings of 1 hit shut out baseball.

My dad has never forgiven Livan for his miserable performance and keeping the Giants from their best chance in 40 years to win a World Series in San Francisco.

Which brings us full circle back to the 2007 NLCS.
Guess who the game 3 pitcher for the Diamondbacks is? 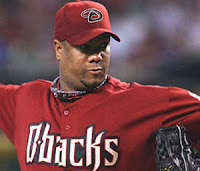 And my dad wants a Colorado sweep.