Neither the Yankees nor Red Sox are winning the AL Pennant

But they were ancient history. The Red Sox and Yankees spend the most. They have the best records in the AL and beat up AL West teams last week including the Division Leading Defending AL Champion Texas Rangers.

So it looks like the commuter lane has opened for either the big bad Yankees or the obnoxious Red Sox Nation to be playing deep into October.

The Yankees are beating up inferior teams and their bats are back. But have you noticed in back to back nights the pitching has let up 9 runs.

CC Sabathia is a great #1 work horse who is having a fine season but hardly last year's Cy Young caliber effort. He has been better than average in the second half and eating up innings. But his August ERA is almost 5. And he not ALL of his bad outings have been against the Red Sox. 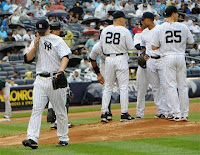 After Sabathia, Ivan Nova has had a good year and has picked up the slack in August. But who knows how he will be in the post season. Freddy Garcia has been a savior in the rotation but do you trust his off speed stuff against the Red Sox, Tigers or Rangers bats in October?

Phil Hughes has been brilliant in some games and yet has an ERA over 6. That tells you what he is usually like. He put together some nice starts in a row and then let up 6 runs in less than 3 innings against a not very impressive A's line up.

And A. J. Burnett may get a mysterious injury soon... the kind that claimed Javier Vasquez last year. Tonight's fiasco put his ERA at 5.31. It's late August. That isn't a small sample size!

Yeah their lineup is better now, especially with Jeter back to being a .300 hitter and A-Rod back. But big bats don't advance in the playoffs. Deep pitching does. And if Sabathia is just ordinary they are putting a LOT of pressure on Ivan Nova.

And before anyone accuses me of being a Red Sox partisan here trashing the Yankees, I am including the Red Sox in this mess.

They can hit with anyone and no doubt Jon Lester and Josh Beckett are as good a 1-2 punch in the AL Playoffs.

And the combination of Eric Bedard, Andrew Miller, Tim Wakefield and John Lackey make the #3 and #4 holes iffy at best and "Oh dear Lord make it stop" at worst.

As the playoffs stand right now, the Yankees would get the Rangers... who have a super deep if not spectacular pitching staff and whose lineup would crush any pitcher NOT named Sabathia.

And if Sabathia is just ordinary in the playoffs, the Yankees exit might be fast.

The Red Sox would draw the Tigers. And Verlander's presence on the team would negate Jon Lester in Game 1... and Game 5 for that matter. Meaning the Red Sox would be in a MUST WIN for Games 2, 3 and 4.

Did I mention their 3rd and 4th starters are questionable?

Doug Fister vs. John Lackey in Game 3 at Detroit. Who would you pick?

I'm not saying the Tigers and the Rangers aren't without their flaws. But they have less to lose. Despite the Rangers being the defending Champs and the Tigers trying to make up for the collapse in 2009, all the pressure is on the Red Sox and Yankees to advance.

And here we sit in late August, and I can't help but think "The ALCS could be Detroit vs. Texas."

And casual baseball fans next year will say "I'm sick of the Red Sox and Yankees every year."