The Yankees replace Jeter with a .300 hitter 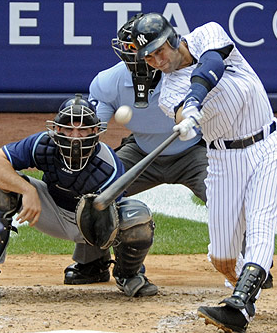 I hate it when reality messes up a perfectly lazy prewritten scenario.
I mean all year haven't we been saying how Jeter is just an average hitter now and that he was dead weight.

And here he is batting .353 since coming off the DL and has his season average at .300.

Damn it. How can we write the same story over and over if it is no longer factual?

As for today's Yankees/A's game. Forgive me if I thought the A's were going to win when they were up 7-1.

I didn't think the Yankees were going to get 3 grand slams in the same game.

I guess we all learn.