How are you liking Toronto, Colby Rasmus? 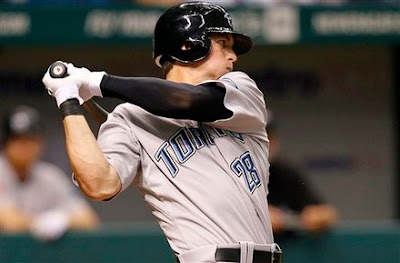 And his defenders, the same ones who called him an elite player on my blog, kept talking about what a mistake it was for the Cardinals to deal this guy.

The thing you have to realize when you talk about Colby Rasmus is that you always need to talk about NEXT year.

He has played 3 seasons. One of the seasons he had a nice year.
But his POTENTIAL means that next year he will be great!

All stats than can be described as the technical term "Shitty."

Because when it is 2012, that will be THIS year. And if he has another disappointing season then his defenders will talk about NEXT year... then 2013 will come around and his fans will say "He's still in his 20s... just wait until NEXT year."

I am guessing by 2013, Colby will be on a new team every year, each thinking that NEXT year is THIS year.

And I am guessing that the St. Louis Cardinals will be in a World Series soon, not regretting for a second that they let someone else think of NEXT year.