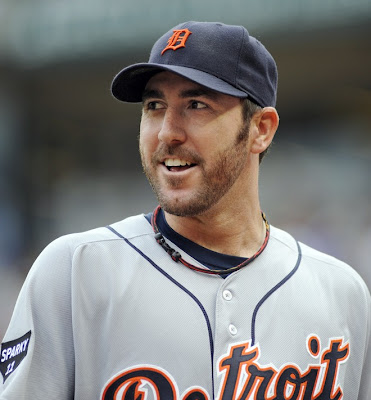 And oh yeah, he threw a no hitter.
An AVERAGE game for him is about 2 runs over 7 1/3 innings.

Plus you can throw in the fact that the Tigers are going to win the Division unless they do a complete face plant and they would never be there WITHOUT Verlander.

No matter if you use the eye ball test, traditional stats or new fangled stats, Verlander is the best.

How could he NOT win the Cy Young?
I think at this point even a mediocre September wouldn't take the award from him.

The only way he can lose it at the point is if Verlander and A. J. Burnett did a sort of Freaky Friday body switch.

And do you know what? That might not even do the trick. Verlander's been that good.