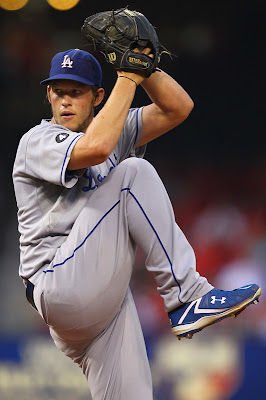 Look, I know the Dodgers are a mess right now.
Frank McCourt took one of the most glamorous and successful teams in baseball history and ran them into the ground.

I am not even sure if the Dodgers have the money to buy those plastic helmets for Ice Cream Sundaes anymore.

But somehow they need to find the money to sign Clayton Kershaw to a long term deal RIGHT NOW.

He hasn't been arbitration eligible yet so this season, that I think will earn him a Cy Young Award or at least SHOULD put one on his mantle, he will make $500,000.

A. J. Burnett will make 32 times that this year.

At age 23, this is Kershaw's second excellent season with the Dodgers and he can be a positive face on the team.

Well guess what?
Someday, and that day may come while I am typing this sentence, a new owner will take over the Dodgers. The new owner has a lot of work to do to restore the fans confidence, but not as much as you would think.

First of all the new owner needs to be better than Frank McCourt. That my friend is a low bar.

But they also need to put together a new positive identity for the team. And guess what? It might already be there.

The great eras in Los Angeles Dodgers history often are symbolized by a pitcher (or two.)
The 1960s Dodgers were best remembered for having Sandy Koufax and Don Drysdale.

The Dodger teams of the 1970s had the amazing home grown infield of Garvey, Lopes, Russell and Cey. But they also had a future Hall of Famer in Don Sutton in the rotation. They also had Burt Hooton and the great Tommy John.

What player comes to mind when you think of the 1981 World Championship?
I am betting it will be Fernando Valenzuela and Fernando Mania.

How about 1988? OK, it is probably the Kirk Gibson home run.
But the REAL MVP was Orel Hershiser. Do the Dodgers beat the Mets OR the A's without Orel's 3 complete game victories (and a save)?

Even the 1995 Division is best remembered for Hideo Nomo's magical season.

Positive memories for the Dodgers begin with the identity making ace.

And Drysdale, Koufax, Sutton, Valenzuela, Hershiser and Nomo were all home grown Dodgers.
So if Kershaw.

If the Dodgers will turn it around, their home grown Cy Young winner will have a lot to do with it.

This isn't signing a 30 year old pitcher to a long term contract and seeing it blow up in your face.

This is taking a young player and making sure you have his prime locked up!

Sign him to a 6 year deal NOW! That way you know you have him for 10 seasons in a Dodger uniform. Probably will have a Cy Young on his mantle. He already has post season experience. And when the contract is up, he'll only be 30 years old!

Out of all the awfulness of this season, the one thing Dodger fans can even BEGIN to cling to is the obscure hope for a better tomorrow.

The Clayton Kershaw era could be what they are looking for.
Sign him now. Circumvent the arbitration and first round of Free Agency and say to Dodger fans "HERE is a player you can get attached to!"

After this year, the Dodgers OWE this to their fans.