Will the Pilgrims move to Utah in Rizzoli and Isles' Boston? 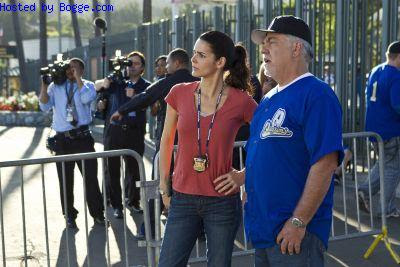 I enjoy Rizzoli and Isles... not just because Angie Harmon is awesome, Sasha Alexander is terrific and Liz Benjamin, a friend, is a supervising producer.

It's a good show and I like the fact that even though it takes place in Boston, not EVERYONE speaks in a Pahk the Cah in Hahvahd Yahd accent.

I just watched the latest episode entitled "Don't Hate The Player." It involved a baseball murder which was a wonderful combination of Brian McNamee, Manny Ramirez and the McCourt divorce.

But even though it involved a Boston sports team, but not the Red Sox. At first I thought this was an instance where they couldn't use the team name in the show and had to create a phony team to avoid copyright infringement with the Red Sox. But then an announcer says "Both the Pilgrims and the Red Sox have a chance to make the playoffs." And Rizzoli says at one point to a Pilgrim player "I'm a Red Sox fan but maybe you can convert me."

In the Rizzoli and Isles universe, evidently there are two Boston teams.

The Red Sox and the Pilgrims (who wear blue uniforms and a logo that looks a lot like the Rancho Cucamonga Quakes' hats.)

I guess that makes sense. Boston is a baseball crazed city and maybe they can support two teams. (Ironically, the Red Sox were originally called the Pilgrims and they won the 1903 World Series with that name.)

But maybe they can't. Part of the McCourt subplot involved them wanting to move the Pilgrims to Utah.

I for one really hope the Pilgrims stay in Boston. They have too much tradition in the Rizzoli and Isles alternate universe to move them!

And where the hell are they going to play? Spring Mobile Stadium in Salt Lake City can only seat 15,000 and isn't the media market that Boston is.

I hope they don't just forget the story line of the Pilgrims moving. It is too much for me to just gloss over.

(But where WAS that stadium? Were those palm trees in the background?)