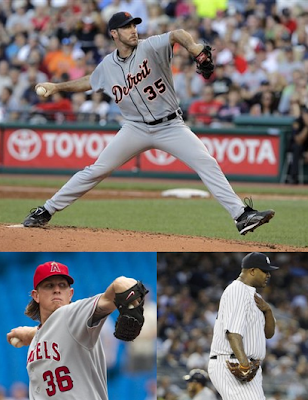 Earlier this week, Jeff Passan wrote an exhaustive but terrific break down of the Cy Young race between Justin Verlander, Jered Weaver and CC Sabathia.

He broke out stats I never heard of and traditional stats and some gut feelings.

Well if their last starts are any indication, then Justin Verlander should be making room on his mantle for an award.

Verlander won a game on the road to prevent the second place Indians from sweeping the Tigers and getting into striking distance.

Meanwhile CC Sabathia let up 5 homers the other day. Granted they were all solo homers, but Cy Young winners shouldn't let up 5 taters. Call me a traditionalist.

And Jered Weaver coughing up 8 runs in less than 5 innings of work won't help his resume.

With three candidates bunched so closely together with such little time left in the season, a few games here or there could spoil a Cy Young candidacy.

Weaver and Sabathia had better hope their last games don't prevent them from getting some hardware.