Jered Weaver is worth every penny 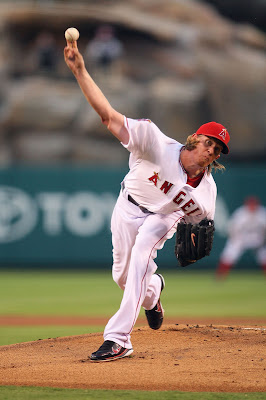 Jered Weaver said something in his post contract signing press conference that I think every sports fan in the world has thought at one point or another.

He basically said that if he can't make $85 million work over his life then he is just stupid.

Good for him.
Anyone who talks about the money he could have picked up in free agency being in a Boston and New York bidding war is not taking some things into account.

But the BIGGEST thing they are missing is that he gets to stay in the same quality organization, being managed by Mike Scioscia, have a shot at the post season every single year, play near his hometown and make more money than most of us will make in 85 life times!

When you get to the point where even after taxes and fees you can still blow a million a year for the rest of your life and leave your kids seven figures, then maybe you should take other things into account. Like "enjoying your situation."

If Weaver spends the entire 5 years with the Angels then he will be a 33 year old man who has spent 11 big league seasons with the same stable organization and be a quick drive from the town he grew up in.

Assuming he finishes in the top 5 of the Cy Young vote this year, he will already have 2 such finishes and 2 All Star berths and 3 trips to the post season.

It is safe to say that he will increase all of those totals after 5 seasons.

After taxes that would come out to MORE MONEY THAN I WOULD ASK A GENIE!

As for missing the bidding war, ask A. J. Burnett how happy he is. Ask John Lackey if he'd rather be in Anaheim. Sometimes being happy and in a place you love with a good organization can trump that SECOND fortune to go with the first.

I wouldn't know. It just seems that way.

But there is another factor to consider.
Go back the length of his contract and look at recent Cy Young winners.

The 2006 winner was Johan Santana. He was 27 years old and won his second Cy Young Award. He was the best pitcher of the American League and putting together a Hall of Fame resume. Injuries have kept him off the big league roster for the entire season so far at age 32.

The other winner in 2006 was Brandon Webb. He was also 27 years old and putting together a brilliant career. He nearly won it again in 2008. He has pitched a single big league game since the beginning of the 2009 season and hasn't pitched this decade yet.

A Cy Young caliber pitcher's career can derail pretty quickly. And who knows what happens in a year.

When you are playing Deal or No Deal and you open a suitcase that is filled with $85 million and the ability to work where you want to live... wouldn't you say "Take the deal"?

I would.
In fact someone offer me that right now.


He pitched 7 shutout innings for his 15 win tonight and lowered his league leading ERA to 2.03.

And oh yeah, helped the Angels get to 2 games back in the loss column of the Rangers.

It's a good deal. As I said in the Cliff Lee signing... it is easy to walk away from $60 million if you get to work where you WANT to work AND collect $85 million.