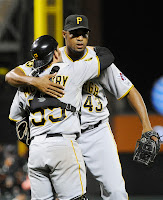 Both the Giants and the Pirates have been stumbling.
The Giants have lost their last three series, including a sweep by the Reds, and allowed the Diamondbacks to have realistic playoff hopes.

Meanwhile the Pirates have dropped 10 in a row and turned their surprising playoff run and reenergized fan base into a collective screaming of "When do Steelers preseason games start?"

So a pair of slugs collided at AT&T Park and somehow the Pirates of all teams came to play.

And with Jonathan Sanchez pitching Game 3 of the series, the Giants had BETTER win tomorrow!

The Pirates have circumvented Lincecum and Cain... meanwhile the Giants had better send a nice big fat fruit basket to the Astros and the Dodgers for keeping the Diamondbacks at bay.

Hey World Champs... you are Giants, but right now sleeping Giants.
If you nap too long you might be playing golf while the pennant goes through Arizona.