Come on CC! Have ONE more bad outing in you 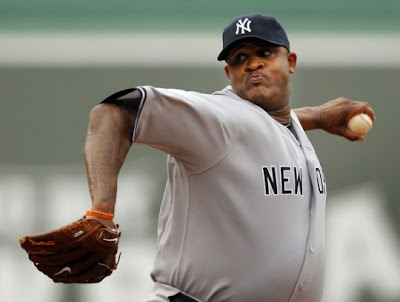 The Red Sox could very well be handing the Cy Young Award to Justin Verlander this year.
Why?
Because CC Sabathia has been so terrific against every other team except the Red Sox.
His numbers are Cy Young contender worthy.
17-7 record. 2.99 ERA. 205 innings pitched. 4th in the league in strikouts with 191.

But his WHIP and BAA fall far short.
And I wonder how much of that (plus his ERA which is good but not top 5) is due to his rancid 0-4 record against the Red Sox with a big fat 7.20 ERA.

If he were merely mediocre against the Sox he'd be a 19 game winner among the league leaders of ERA and maybe a few more strikeouts thrown in there.

Now the law of averages say that Sabathia will be good today.
And the Yankees are facing John Lackey, so his performance will probably be filed under "Who the hell knows?"

That being said...
One more Sabathia loss would not only mean the Magic Number for the Division would be 26 going into September...

Not only mean that the favorable match ups of Beckett vs. Hughes and Lester vs. Burnett would finish the series...

But put the ole "We're just not as good" doubt in the Yankees cranium.