Um Giants... what the hell happened? 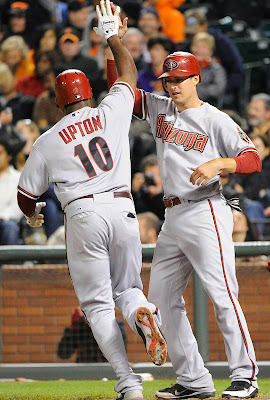 It's August 2nd. The Giants are supposed to be cruising to the NL West. On July 29th, they had a 4 game lead and had added Carlos Beltran to the mix. They had taken 2 of 3 from the mighty Phillies and were poised to show all of baseball that not only were they the Defending World Champs but that they were the team to beat.

A series with Arizona at home was on the horizon. If all went right, they could bury the Diamondbacks in the standings and cruise through August and September.

What has gone right since?
Um... well nothing.

The got clobbered by the Reds last weekend and the Diamondbacks came into AT&T and said not so fast.

A 5 game losing streak at any point in the year sucks and with the Giants constantly playing with fire in their high wire act they were bound to hit a bad patch.

But any talk of "The Diamondbacks can't keep up with the Giants" or "They are a nice story but they'll fade" can't be taken seriously.

Sure they are doing it with smoke and mirrors and Justin Upton.
But I remember a certain National League West team last year making their big push in August and September and riding it all the way to a World Series title.

Do NOT slack off, Giants. A 10 game losing streak late in the season doomed the Padres last year. The Giants are half way to matching it.

Essentially the Giants and Diamondbacks are going to play a 52 game season. The team with the most wins takes the West. Don't look at home field advantage over the Phillies. Don't even take notice that the Brewers are not only looking good but could take home field advantage in the Division Series away from the Western Champion.

You have a title to defend.
Go get them.