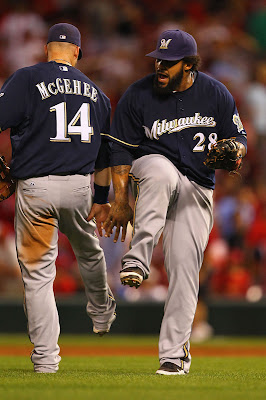 On July 19th, the National League Central looked like it was going to be a wild insane ride.
The Pittsburgh Pirates were in first place by themselves.
The Brewers, Cardinals and Reds were all within 5 games of first place. With less than half a season to play it was anyone's guess.

Since then and including tonight's Brewers win, it is a smidge more clear.
The Reds and Pirates have somehow fallen 10 games back and the Cardinals are 4 back and the Brewers have home field advantage in the Division Series.

Folks, the Brewers are playing like an elite team.
That is a strange sentence to see written, but folks... we are entering mid August and do you know who has been better than the Brewers?

The Phillies... The Red Sox and the Yankees.
That's it.

Should we start preparing for a Brewers World Series?
Sound crazy?

Last year at this point if I said "a Rangers and Giants World Series" you would have called me crazy.

In 2008 if I said "The Rays are going to the World Series and they are playing the Phillies" you would have rolled your eyes.

In 2007 if I said "looks like the Rockies are heading to the World Series" in mid August, you would have fitted me for a straight jacket.

I think Bernie Brewer and Sausage Races might be going deep into October.
That's a good thing.

But NL Central. Get on it.
Make things exciting, would you?