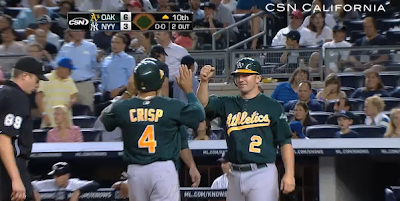 I always liked Coco Crisp. He never quite was Johnny Damon's replacement but he was an exciting and fun player with an awesome name. And lest we forget his pennant winning catch in 2007, his epic ALCS extending RBI in 2008 and being a World Champion Red Sox player?

Well today he gave his old friends a little help.
2, count em, TWO home runs including one off of Sabathia and one to win the game in the 10th.

Mix that with the Red Sox drubbing of Texas and a wonderful scenario has transpired.
The Red Sox, who went on the road against the defending AL Champs and current AL West leaders, and the worst they can do is split 4.

And the A's went into Yankee Stadium and won the series.

Thanks for the help Coco!