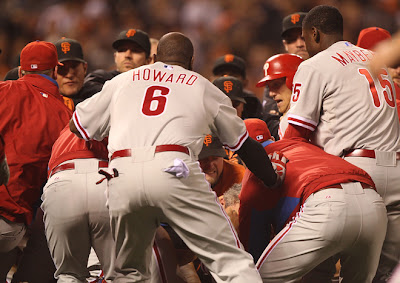 I know I am supposed to get all Quest For Fire excited when I see a bench clearing brawl in baseball.

I know it is supposed to show that the players really care and are passionate and will make it clear that losing is not an option and respect should be shown.

But I don't that. Brawls and bean balls don't impress me at all.

If you want to show me that you don't like a player hitting a homer off of you, then strike them out the next time.

You want to show me that you care and hate losing? Then win!

I remember when Mets fans got all over Shawn Estes that he didn't hit Roger Clemens when they faced off. It was supposed to be revenge for hitting and chucking a bat at Mike Piazza. "He should have hit him. Send a message" etc.

Do you know what he did instead? He hit a home run off of Clemens.
Now what is a bigger humiliation for the Rocket?
Being hit by a pitch or letting up a tater to the opposing pitcher?

If he hit him, then Clemens would be on base with the top of the order coming up. Congrats. You've shown what a macho man you are... now you are facing a potential rally.

I always thought the A-Rod - Varitek fight was overrated. Sox fans pointed to that game as a turning point in the season, and it was. NOT because Varitek punched A-Rod while he was wearing his catchers mask. It was a turning point because Bill Mueller homered off of Mariano Rivera to win the game.

Putting their men on base and having players up for suspension isn't impressive to me. It feels desperate. Like you are ACTUALLY saying "I can't beat you, but I can be petty and try and hurt you."

Did the Giants show any fight last night because they brawled?
Hell no. They got their butts kicked and need to win today to hopefully salvage a split in the serious.

Want to impress me?
Win the next to two games.

The whole hitting stuff? Forget it. Tip your cap to the opposition when they do well and get their butt out the next time you face off.