I'll say it... the Red Sox over babied Clay Buchholz 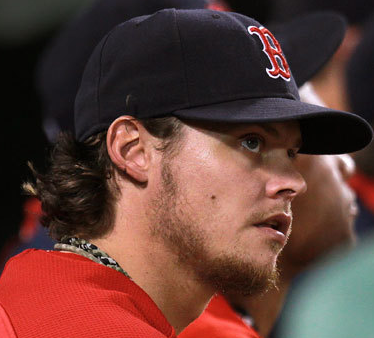 The Red Sox decided not to trade for Rich Harden.
Why? Because they already had an ace caliber pitcher who is always hurt!
Clay Buchholz has a stress fracture in his back. I don't think it is as bad as what Ralph Macchio had in The Outsiders, but just as destructive for the season.
Hasn't that been the mantra this season?
Get Lester and Buchholz healthy and the Sox could win the pennant.
Now what?
Lester is healthy and looks good and Beckett has been solid.
Lackey has been winning, but how long will THAT last?
Andrew Miller is not the ace that the Tigers and Marlins thought he was. He's a #5 pitcher.
Tim Wakefield is Russian Roulette.
And Eric Bedard will probably be in a full body cast by Labor Day.
The Red Sox pennant chances are no better than the Yankees, whose rotation we love to make fun of.
The Rangers pitching staff is miles ahead of the Red Sox and Yankees. I even put the Angels in front of us.
And I will say it. I can never rely on Clay Buchholz again.
I've been saying since 2007 that the Red Sox have been babying him.
They've been treating him with kid gloves to avoid injuries since he threw the no hitter. And what has he been since?
AN INJURY PRONE PITCHER!
Red Sox fans, ask yourself. If Buchholz were a Yankee, wouldn't you be throwing him in with Phil Hughes and Joba Chamberlain as pitchers with ability but whose bodies have betrayed them.
And here we have Clay Buchholz. It's his 5th big league season. He's 26. And he has pitched 100 innings a grand total of one time in his career.
All the while he has been treated with kid gloves and all of that love and care has put him on the shelf AGAIN!
He's another example of a babied pitcher. Instead of a reliable stud we have an injury prone frustration.
Any decent season the Sox get from Clay Buchholz MUST be considered a bonus from now on.
He is another pitcher ruined by kid gloves.