On base versus Run Production... 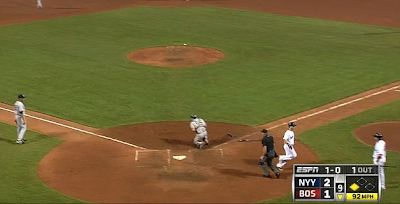 Not long ago, I wrote about how the batters job is NOT to get on base but to produce a run.
Getting on base is one of the methods to create a run but not the only way.

Simply "not making an out" isn't the name of the game. Putting runs on the board is.

And no game illustrated that more than last night.

So a look at those innings, the second, fourth and sixth must have been very successful innings.

More so than the 9th where only one runner got on base.

Yet all of those innings produced a single run... the same as the 9th which included two batters whose intention was NOT to get on base. Ellsbury bunted Scutaro over and Pedroia brought him home with a sacrifice fly.

That is the name of the game. Run production.
Saying the name is On Base percentage is like saying the pitchers job is to throw strikes and keep runners off the base.

Let's not over complicate things, people.

People have been ripping apart Ryan Howard because his on base production is down as are most of his offensive stats.

His job is to knock in whatever runners are on base... and few do it as frequently as he does.

So you might downgrade his performance based on his OPS, his on base and whatever stats you like to use... and the Phillies will keep winning and probably will go to the World Series again.

And I am guessing most Phillies fans would rather have Howard producing runs anyway.

I could be wrong.