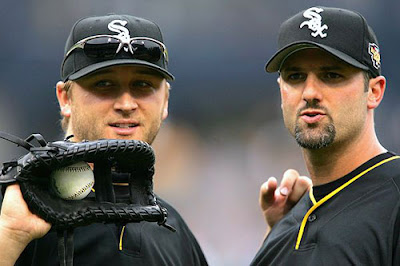 Tomorrow, the White Sox will continue to try and turn their season around and limp back into contention.

And the starting pitcher will be Mark Buehrle. Chances are Paul Konerko will be in the lineup, either at first base or as the designated hitter.

They have been a tandem for so long that it is truly worth a long salute here.
People talk about the great combination of teammates that Derek Jeter, Andy Pettitte, Bernie Williams, Jorge Posada and Mariano Rivera made for all of those seasons in New York.

And Buehrle and Konerko have not been together for as long as they have been nor have the success. But for a franchise best remembered over the decades for throwing a World Series instead of winning them, Buehrle and Konerko have seen a lot of winning. They contributed big time to the only World Series appearance in Chicago in more than half a century and the only Chicago title in 94 years.

Konerko was a product of the Dodgers organization and was later dealt to Cincinnati. He came over to the White Sox in a deal for Mike Cameron before the 1999 season. That was his third year in the big leagues and his third big league team. It is safe to say he found stability on the South Side of Chicago.

He cracked 24 homers his first year with the White Sox and posted an .862 OPS. 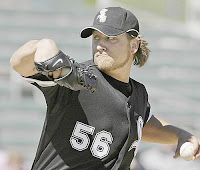 And in no small point for this post, he was joined that year by Buehrle. While Konerko was a first round pick and coveted prospect, Buehrle was picked 38th.

Not 38th overall. In the 38th round. He was the 1,139th pick overall. Right before him, the Pirates picked Shaun Skrehot. The infielder played 9 seasons and made it to AA Nashville and Indianapolis.

The pick after him has thrown 12 seasons in the majors.

The 2000 White Sox had the best record in the American League but were swept out of the playoffs by Alex Rodriguez and the Seattle Mariners.

It has been a while since A-Rod has been a Mariner. But that whole time, these two players have represented the White Sox with clutch play and class.

While Konerko played behind the massive shadow of Frank Thomas, he put up solid if not spectacular numbers. In many ways, his career resembled his one time teammate and current coach Harold Baines. His stats may not have been elite but they were good enough to make 5 All Star teams and twice be a top ten finisher in the MVP vote. And play nearly every season injury free. He is on pace to play 150+ games again this year, which would be the 8th time he would pass that mark in 13 seasons.

And of course he came up big time for the 2005 White Sox, unquestionably the greatest Chicago baseball team since the First World War.

His home run off of Tim Wakefield helped sink the Red Sox hopes to repeat as World Series champions. His 2 homers, 7 RBI and .937 OPS crushed the Angels in the ALCS and earned him MVP honors as the White Sox won the pennant.

And finally his mammoth grand slam in Game 2 of the World Series turned the game around and helped set up the White Sox win.

The starter of that game? That would be Mark Buehrle.
Since 2000, Buehrly became one of the most reliable and durable starting pitchers in all of baseball. He recorded 200+ innings every year from 2001 to 2010 (and is on pace to do so again this year.) He had made 2 All Star teams by 2005 and finished 5th in the Cy Young vote that year.

He started Game 3 of the World Series and got a no decision. But when Game 3 went to the 14th and manager Ozzie Guillen had burned through his bullpen, he turned to Buehrle to protect a 7-5 lead. He earned the save, to date his only one in the majors. He joined Grover Cleveland Alexander as the only person to start and then save consecutive World Series games. 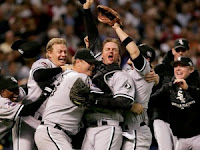 The next day the White Sox won the World Series for the first time since 1917.

After the title, Konerko was offered more money to go to the Angels or the Orioles but stayed in Chicago. He responded with three more All Star selections, a fifth place finish in the 2010 MVP vote and 2 homers in the 2008 Division Series against Tampa Bay.

Buehrle continued to be a steady and sometimes dominant starter. He was named to two more All Star teams and won the last two Golden Glove awards.

In 2007, he threw a no hitter against the Rangers. In 2009 he did that one better by throwing a perfect game against the Rays. He would retire a record 49 consecutive batters that year, breaking the record held by his teammate Bobby Jenks.

And there was something kind of bad ass about Buehrle, an avid animal lover, wishing ill to Michael Vick.

Not saying I condone wishing harm on others, but it is cool how he never gave a damn what anyone thought.

The two are still solid players and performers after 12 seasons as teammates. They won't be going to the Hall of Fame. Yet if anyone deserves to have a lifetime of standing ovations and love from White Sox fans, it would this duo of classy solid and champion players.

They don't get the press that players on the Yankees, Red Sox or even the Cubs would get. But when you put more than a decade into the same team, bring a championship, multiple playoff berths and class to a franchise that needed turning around, then you have earned our salute.

Now take it easy on the Red Sox.