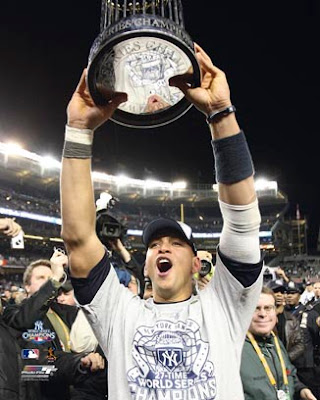 There was a very odd article in the New York Times by Harvey Araton from the other day. The great Lisa Swan of Subway Squawkers pointed it out to me.

The premise of the article had to do with Alex Rodriguez and his body that could very well be breaking down. His multiple trips to the disabled list in the past few years seem to confirm that.

And yeah, the contract is going to last until I think 3295.

But the article is odd for two reasons.
It implies that he hasn't been an elite player for a dozen years when in fact he was the AL MVP as recently as 2007.

And he kinda sorta helped the Yankees win a World Series.
In fact he hit critical "Game on the line Game Tying Homers" in the Division Series and ALCS and clobbered a key homer in the World Series.

Most players who win multiple MVPs and was instrumental in a World Series Championship are kind of revered in a city.

Even one with the baggage of steroids hanging over them. (See Pettitte, Andy.)

I'm not saying that the contract WON'T be an albatross... but shouldn't the 2009 title put a LITTLE in his credit column?