The Phillies and Giants are an NLCS Preview? Not if the playoffs started today 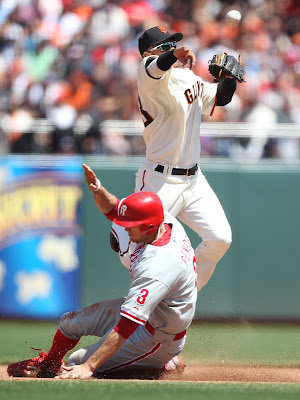 The two teams have looked like a pair of locomotives ready to crash in the NLCS.

Here's the problem.
If the playoffs started today, the Phillies and Giants would indeed meet... in the Division Series.

The Brewers have passed the Giants in the win loss columns. That means that the Defending World Champs would open on the road in Philadelphia.

That's right, the great rematch would NOT be for the NL Pennant but for the right to play either Milwaukee or Atlanta in the NLCS.

Lincecum vs. Halladay... Cain vs. Lee...
If a team wins both of those games, they will be just one win away from eliminating the other.

Or the two could clash and tire each other out and suddenly we have the National League Champion Milwaukee Brewers.

And before we assume ANYTHING, keep in mind the Giants spot in the playoffs is thin indeed.

The Diamondbacks are 1/2 a game back and tied in the loss column.
Can you imagine a Milwaukee/Arizona NLCS?

You KNOW TBS execs would be hanging themselves if that happens.

Get back in gear, defending World Champs.
We have a dream NLCS rematch we want to see and you guys aren't holding up YOUR end of the bargain!!!