Pirates... Indians... get your game in gear 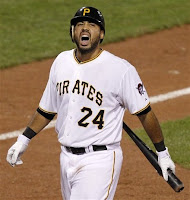 For a while I was weighing the pros and cons of a Pirates - Indians World Series... two football cities without a lot to root for in the world of baseball were in first place.

Two teams were ready to spit in the face of anyone who says that low revenue franchises can't compete.

On July 20th, the Indians were tied for first place with the Tigers. That same day the Pirates were 1/2 a game behind the Brewers but actually ahead of Milwaukee in the loss column.

The Indians are at break even .500.
The Pirates wish they were there, lagging at one game under .500.

What in the name of Tris Speaker and Honus Wagner is going on here?
Both teams have made trades to improve themselves and they are losing... a lot.

OK, maybe my World Series fantasy was a bit rash. But please! You can't have a season like this and finish sub .500! NOTHING positive can come with a losing season.