Remember when Houston had a major league franchise? 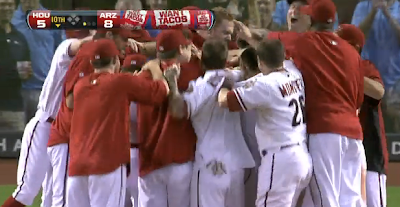 I had a whole blog post written in my head for when the Astros beat the Diamondbacks tonight.
It was about the final 44 games and how the Giants and Diamondbacks are basically playing an abbreviated season.

You will forgive me for almost jumping the gun. I mean the lowly Astros had a 5-1 lead going into the 8th inning. I mean even HOUSTON could hold onto a 4 run lead over 2 innings.

They even had a 2 run lead with 2 outs and 2 strikes in the bottom of the 9th.
So forgive me for thinking the Astros had a shot to win.

I didn't expect a 2 out game tying homer from Paul Goldschmidt who was in AA about an hour ago,

And I didn't think slumping Chris Young would get a walk off shot.
Sorry that the idea of the Diamondbacks getting 7 unanswered runs in the last 3 innings hadn't crossed my mind.

So the minor league franchise in Houston is on pace for 110 losses. The franchise has never had a 100 loss team. This one is all but assured that.
The Astros would have to go 25-19 the rest of the way to avoid a 100 loss season.

If tonight is any indication, that is an impossibility.

But the worst crime they committed? They prevented me from using a blog post that I all but wrote in my head.