10 Reasons the Red Sox and Yankees Rivalry is still cool 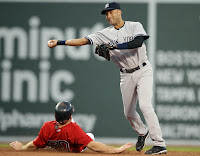 Two recent champions are squaring off tonight. Two proud franchises who have memorably faced off in the LCS have some scores to settle. Two baseball crazed fan bases eagerly are watching the games this weekend seeing what will hopefully be a preview for the 2011 LCS. With stars on each side this weekend’s series is THE series to watch.

And the Red Sox and Yankees are also playing.

Of course the match up I was referring to in the first paragraph was the Giants and Phillies series, which has a little more electricity than the Red Sox and Yankees series.

Cliff Lee’s complete game gem last night gave the series an early boost. If baseball had ANY sense, they would be promoting the hell out of Philadelphia and San Francisco’s friction as a cool new rivalry for the 2010s.

But guess what?
Red Sox and Yankees still have a few sparks in them.

Both Robinson Cano and Jacoby Ellsbury were young members of their teams most recent World Series titles. But this year, both players are standing center stage as the identity of the teams going into the new decade. And showing with a game that includes speed, power and defense they are complete players. And with a look at their lean physiques, they are the face of a ‘roid free era.

2. Granderson and Gonzalez want in!

The Yankees have brought in one of the truly good guys in all of baseball when they acquired Curtis Granderson from the Tigers. The Red Sox picked up one of the great players you never heard of from San Diego in Adrian Gonzalez. New blood gives the rivalry a nice boost. Both of their next rings will be their first. Good solid veterans deserve titles. 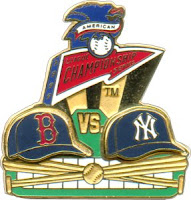 3. The last time for some familiar faces

When the Yankees and Red Sox played in the 1999 ALCS, Jorge Posada, Derek Jeter and Mariano Rivera were all on the Yankees roster. Jason Varitek and Tim Wakefield were in uniform as well. All 5 are still there. Wouldn’t it be something if they played for the pennant in 3 different decades?

(Yes I know that Wakefield wasn’t on the active roster for the 1999 ALCS, but you get my point.)

4. Yup they are still there too.

Since 2004, David Ortiz and Alex Rodriguez have been linked to something a little less savory than team spirit to boost up their numbers. Are they both clean now? Well at least we know they being tested. Will they savor a post “getting busted” ring? You can bet on that. (Don’t REALLY bet on it, A-Rod.)

5. The Padding of Sabathia, Lester and Beckett’s resumes
Jon Lester and CC Sabathia are two of the top left handed aces in the American League. Lester won a World Series clincher. Sabathia was an LCS MVP. Beckett? He spits on those credits. He was a World Series MVP for one team, an LCS MVP for another and threw a complete game shutout to clinch a World Series… IN Yankee Stadium! Another big October for them and they can call themselves some of the best post season arms in their era… something that comes in handy if they want to make a case for Cooperstown. 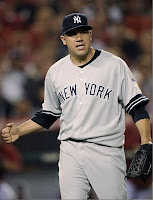 Ramiro Mendoza, Johnny Damon and Eric Hinske are the only three living people to play in the post season with a World Champion Red Sox and Yankee team. If the Red Sox win the 2011 World Series, add Alfredo Aceves to the list.

He should have that distinction. 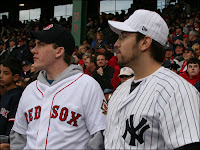 7. For all the complaining, there still seems to be a lot of Red Sox and Yankees fans out there

Remember how everyone said they were sick of American Idol? I was bored with it after Simon Cowell left. And everyone was saying how it was dead. And yet it was consistently the top rated show. So SOMEONE must have been interested.

Watch a Red Sox and Yankees ALCS get amazing ratings and become the talk of sports… even if the talk is people saying “I am so SICK of these two teams that I watched every game!” 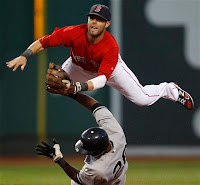 9. Hey. They are STILL the best teams in the American League!

Sure the Rangers are the defending champs and have a super deep pitching staff and solid line up. But as of this typing, the Sox and Yankees are tied for the best record in the American League. You can’t say the rivalry is dead when it is, statistically between the two best records with the most fans. You want YOUR teams to have a better rivalry? Win more games. 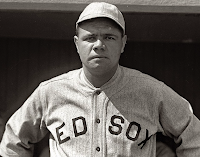 10. The Rivalry is Evolving

The Red Sox and Yankees rivalry used to be the proverbial “Lawn Mower versus Grass” match up. The Red Sox would get great players and put up a fight, but the chant 1918 had teeth. Then 2004 turned the tables on the Yankees and suddenly Red Sox fans had a come back.

We’re seeing the two franchises like we have never seen them before.
No more curses.
No more crying over grandparents graves.

Guess what?
That’s worth watching!

So trash Red Sox and Yankees all you want.
Me?
I’m watching it.