Marlin fans... don't get worked up over the stadium name 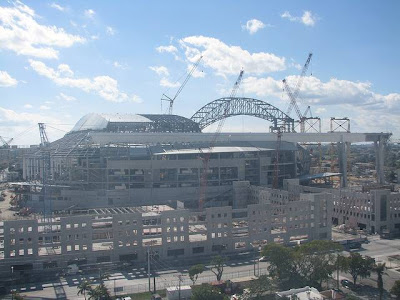 The Marlins new ballpark is coming along around the site of the old Orange Bowl.
What's it going to be called?

According to Big League Stew, one of my favorite reads on line, some Marlin fans are worried about the name sounding too corporate. Or perhaps even worse taking on a name that would make everyone think of a foreign conglomerate.

Listen to me and listen well. (I think that was grammatically correct.)

Would you rather have a stadium that SOUNDED great or that was a great place to see a ballgame?

The worst era of baseball stadiums gave us some of the best names for parks in history.
And the current crop of stadiums have decidedly mediocre or cold and corporate sounding names.

Let me show you what I mean. 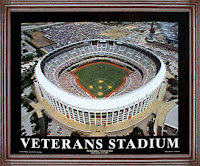 The Phillies used to play in Veterans Stadium.

That is a great name for a sporting venue. Honoring the military, it had a nice rhythm to its name and a cool nickname as well.

And it was an awful cookie cutter park. It was dark and ugly and unappealing.

But it had a cool name. MUCH cooler than Citizens Bank Ballpark.
Which is a better place to play?

Two of the greatest stadium names EVER were Riverfront Stadium in Cincinnati and Three Rivers Stadium in Pittsburgh.

Both were perfectly tailored to their cities. The Ohio River was the lifeblood of Cincinnati and its stadium name reflected that.

Pittsburgh was formed at the meeting points of the Ohio Monongahela and Allegheny rivers, and the stadium name paid tribute to all three.

The names didn't make the stadium.

Jack Murphy helped bring big league sports to San Diego and the stadium honored him... and was a dull dull dull stadium.

Compare that to the corporate named PetCo Park, which is a fabulous stadium in the heart of the city.

It is a stadium that would make Jack Murphy proud. 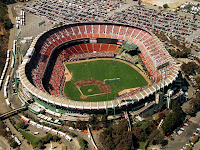 I would say few ballpark names were better than Candlestick Park.

It had geographic relevance. It was descriptive of where in San Francisco it was located.

Calling it a Park instead of a Stadium was a nice touch. And it had a wonderful nickname, "The Stick."

And as someone who went to many games there, I can tell you "The Stick" sucked. It was cold. It was ugly. It was poorly designed for baseball and equally ill fitting for football. It was freezing in August and there was one road leading in and out which meant traffic jams even if the game had a tiny crowd.

Compare that to the coldly corporate sounding AT&T Park. Its name reflects corporate take overs as it was originally Pacific Bell Park, then SBC Park and finally the Death Star's stadium.

And it is the most beautiful, most fan friendly and unique new ballpark in the country with fascinating features and the greatest new tradition in baseball: The boats in McCovey Cove.


It's not all in the name, Marlins fans.
You guys are finally getting a baseball only stadium and who knows? Miami might become a destination spot for free agents. Fans can come out to the game and not be baked or rained upon. And the core of players are talented. It might be a glorious time for a franchise that has a World Series title in each of the last two decades.

So who cares if it is called Blackwater Stadium?

It's a potentially great new place where all new memories of terrific and possibly sustained Marlins teams can grow.

Take a look at the current Marlins stadium. I think it changed names twice since I started writing this blog post.

I honestly thought it was still called Dolphin Stadium.

If the new park changes its name as often as the old one did, it won't matter. The PARK will be where you will be happy, no matter what it is called.