I can get used to THIS Red Sox team! 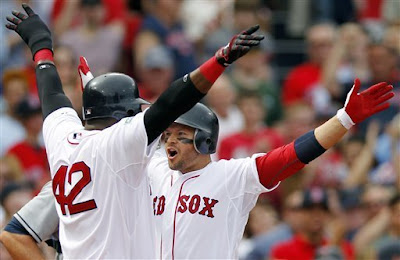 How did this happen?
A dead from the neck up Red Sox team came staggering into Fenway Park against the Tampa Bay Rays, the team that will probably win the AL East.

So naturally they took the first 3 games of the series and will play the Patriots Day Game to try and complete the sweep.

Of course Cody Ross subs for Jacoby Ellsbury and crushes a pair of homers.

How odd is that?

April 9 - 4-2 win in Toronto. (A day after blowing leads in the 9th and 11th, the Sox win their first game of the year with a 3 run 9th inning rally capped off by Ryan Sweeney's 2 out go ahead RBI single)
April 14 - 13-5 win against Tampa Bay. (Buchholz fell behind 4-0 in the first but the Sox slugged 5 homers to come from behind.)
April 15 - 6-4  win against Tampa Bay. (David Ortiz doubled twice including a tie breaker in the 6th.)

April 5 - 3-2 loss in Detroit. (The Red Sox rally to tie the season opener with 2 outs in the 9th only to lose on a bases loaded walk off single by Austin Jackson.)
April 8 - 13-12 loss in Detroit. (The Red Sox bullpen surrender a 3 run game tying homer in the 9th to Cabrera and Avila smacked a 2 run, 2 out walk off come from behind homer to win it in as brutal a loss as you will ever see.
April 11 - 3-1 loss in Toronto. (Lester throws a complete game but Ricky Romero shut down Boston's bats and Rajai Davis manufactured a critical run.)

How did THIS happen?
See you bright eyed and bushy tailed tomorrow morning.