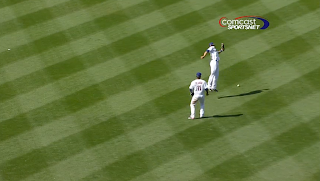 I'm not kidding.
My seven year old kids play in a "Coach Pitch" league. Today, the kids made a few nice plays, a catch or two and my son Matty made a nice pick and ran it to second for the force.

A few times as a coach I had to yell to the kids "Go to the base!" or "Throw to first." But they are all new to baseball. They've only been around for 7 years!

Some times the throws to first weren't caught, but we applauded them for throwing it the right direction.

Meanwhile the Mets allowed the Giants to tie the game in the 9th with a potential game ending pop fly that dropped for a 2 run 2 out double.

Then the Giants had a chance to send the game to the 10th but Aubrey Huff was playing second base for reasons unknown.

Evidently he didn't have a coach yelling "RUN AND COVER SECOND!" because he didn't do that and the Giants couldn't pull an inning ending double play.

No excuses for Huff. He's not 7 years old. He's been a major leaguer since 2000. You'd think he would know where to go on a ground ball! 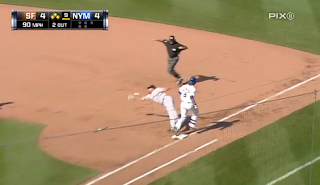 And how did it end?

With a bad throw from home to first of course.

But in THIS league you don't applaud someone for throwing to the wrong base.

Giants... Mets... my kids are NOT impressed.