Yesterday showed why the Red Sox aren't a playoff team 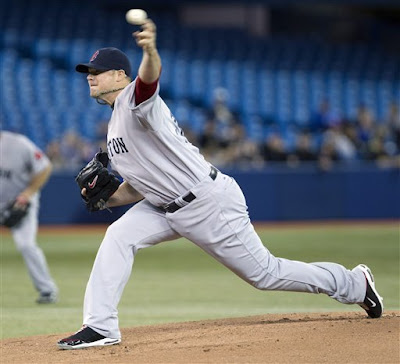 I know it can seem silly declaring a team's playoff hopes dead before they play their first home game. ESPECIALLY when that team won 90 games the year before, 89 the year before that and made the post season 6 of the prior 7 years.

But let me ask you a few questions and you might understand why I have no playoff hopes for this team.

1. How many starters on the Red Sox can you count on?

That would be Jon Lester. Everyone else is suffering from injuries (just have your thumb treated, Beckett and join Dice-K and Lackey on the DL!) will eventually be injured (I'm looking at YOU Feet of Clay Buchholz) are relievers thrown into the rotation (Daniel Bard aka Joba Chamberlain 2.0) or should be a minor leaguer (no offense, Felix Doubront.)

2. How many relievers on the Red Sox can you count on?

At this point? Padilla. And that is scary.

3. Seeing that you can't count on 80% of the rotation nor the bullpen, can the Red Sox afford to lose games where Jon Lester has pitched well?

Nope. Those have to be put in the bank.

4. Has Jon Lester pitched well in his first two starts?

Very well. He has lived up to his billing. He let up only 3 hits over 8 innings yesterday and in the opener let up one run over 7 innings.

5. How did the Red Sox fare in those games?

They lost them both.

This team has virtually ZERO margin for error. Especially with the way the Rays have come out of the gate (and with their young pitching, they can pick each other up) and the way the Yankees recovered from the opening Tampa sweep. (Reports of Mariano's demise were exaggerated.)

Yes it is early.
It's not even Tax Day.

But 89 or 90 wins aren't going to cut it for a trip to October.
And there is no way you are going to win 95 of the final 156 games if you can't cash in terrific Lester outings.

2 out of 3 of those games should be automatically in the team's win column if not Lester's.
There's not a lot of depth to pick up the slack.

Lower your expectations Red Sox fans.
This is not a playoff team.

BUT I will dutifully update the tally.

DODGED BULLET GAMES -1
April 9 - 4-2 win in Toronto. (A day after blowing leads in the 9th and 11th, the Sox win their first game of the year with a 3 run 9th inning rally capped off by Ryan Sweeney's 2 out go ahead RBI single)

TEETH GRINDER GAMES -3
April 5 - 3-2 loss in Detroit. (The Red Sox rally to tie the season opener with 2 outs in the 9th only to lose on a bases loaded walk off single by Austin Jackson.)
April 8 - 13-12 loss in Detroit. (The Red Sox bullpen surrender a 3 run game tying homer in the 9th to Cabrera and Avila smacked a 2 run, 2 out walk off come from behind homer to win it in as brutal a loss as you will ever see.
April 11 - 3-1 loss in Toronto. (Lester throws a complete game but Ricky Romero shut down Boston's bats and Rajai Davis manufactured a critical run.)


The Sox open Fenway tomorrow against Tampa on Friday the 13th.
No potential bad omen there.