This is actually a big game in Tampa today 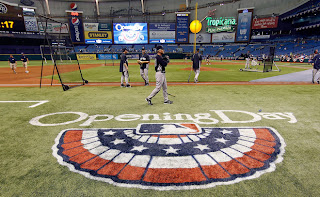 I mean it. This game is very important for the Rays and Yankees in Tampa.
I am not being sarcastic or come up with some convoluted ironic rationale.

This game will mean a lot. And maybe loom like a shadow at the end of the season.

Who will win the A.L. East this year?
Barring a miracle or the Mayans being 100% correct, it won't be the Orioles.
Chances are the Blue Jays will be exciting but playing golf in October.
And if yesterday was any indication, the Red Sox bullpen will conspire to keep them from playing October ball for the third straight year.

The consensus is either the Yankees or the Rays will win the East with the other one playing for the Wild Card.

Chances are either the Rays or the Yankees will be playing a winner goes to the playoffs and loser goes home game at the end of the year. And the other one will be able to rest their staff at least a day before the Post Season starts.

And what is the best way to finish ahead of the other team? Beat them head to head.
This game means just as much as the six they will play against each other in September.

They will lower the Magic Number by the same amount.

Last year the Yankees and Rays met 18 times. They split those evenly, 9-9. Ten times the games were decided by 2 runs or fewer including the mind boggling, Red Sox destroying 8-7, 12th inning miracle at the Trop to end the season.

This year the Yankees have superior hitting and the Rays better pitching.
Each game could potentially go either way.

Get these wins now.

In 2005, the Red Sox and Yankees, fresh off of the '04 miracle, began the season with 3 games. The Yankees took the first 2. The Red Sox won the finale.

In the end, the Red Sox and Yankees finished the season tied. However they played 19 games head to head and the Yankees went 10-9, ergo giving them the Division Title.

What if the Red Sox took 2 of 3 instead of dropping 2 of 3 to begin the year?

I noted yesterday, the Red Sox started last year 0-6 and missed the playoffs by one game.


Yeah I know there is a lot of time to make up for lost games.
But isn't it better to bank games early than try to catch up?

It's a big game.
It may be April 6, but if the Yankees are using CC Sabathia or the Rays use David Price in a one game playoff, they might think to themselves "Man, we should have won that series in April!"