I didn't see this coming... and neither did you 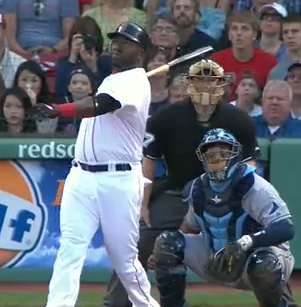 Show of hands.
When the Red Sox fell behind to the Rays 4-0 before they even came up to bat, how many of you thought "Well THIS game is over"?

Anyone who didn't have their hands up is a damn liar!

But hey. 5 homers come in handy. And for the second straight game, the Red Sox... the same bumbling Red Sox who hobbled into Fenway Park for the home opener, have at the very WORST split a series with the Rays and just needs to win one of the next two games (including the 11AM Patriots Day Game) to win the series.

And as we learned last September, these head to head games matter.

Sure the Sox are still not a playoff team at this point in my mind.
But hey! Get on a nice winning streak and who knows? It might be an interesting Spring and summer!

DODGED BULLET GAMES -2
April 9 - 4-2 win in Toronto. (A day after blowing leads in the 9th and 11th, the Sox win their first game of the year with a 3 run 9th inning rally capped off by Ryan Sweeney's 2 out go ahead RBI single)
April 14 - 13-5 against Tampa Bay. (Buchholz fell behind 4-0 in the first but the Sox slugged 5 homers to come from behind.)

TEETH GRINDER GAMES -3
April 5 - 3-2 loss in Detroit. (The Red Sox rally to tie the season opener with 2 outs in the 9th only to lose on a bases loaded walk off single by Austin Jackson.)
April 8 - 13-12 loss in Detroit. (The Red Sox bullpen surrender a 3 run game tying homer in the 9th to Cabrera and Avila smacked a 2 run, 2 out walk off come from behind homer to win it in as brutal a loss as you will ever see.
April 11 - 3-1 loss in Toronto. (Lester throws a complete game but Ricky Romero shut down Boston's bats and Rajai Davis manufactured a critical run.)

Oh and keep this in mind too... the Red Sox are only 2 games out of first place.