Nice to see Jake Peavy is back 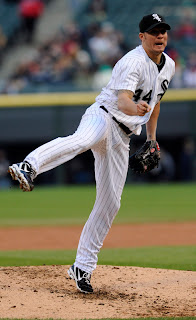 Wins and losses can be such a brutal stat sometimes.
Jake Peavy pitched yesterday against the Red Sox, going 9 innings, giving up 1 run on 4 hits and 1 walk.

He is credited with a  loss, preventing him from catching Robbie Ross and his 4 vulture wins.

But the loss not withstanding, it is his second straight complete game where he looks like an ace.
I hope he is picked as pitcher of the week as yesterday's tough luck loss would be combined with Mondays 3 hit shutout.

As he stands this year, his average start is as follows:

That's the way an ace pitches.

It's been a while since we've seen ace Jake Peavy. Ken Williams has received a lot of heat for trading way some young talent for Peavy, including Clayton Richard.

Well Richard doesn't look very impressive this year and the White Sox have found themselves an ace. If they get their bullpen together, the South Siders could hang around the Central race for a while.

And lest we forget, Peavy already has a Cy Young Award on his mantle.
If he keeps this up, could he be an A.L. Cy Young candidate to go along with his N.L. award?