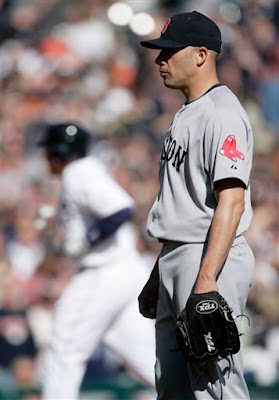 OK, it is early in the season. But there is something so pure about how the Red Sox lost the first three games of the season that it actually is helpful and refreshing.

Remember last year? They had sky high expectations and started 0-6 and 2-10.
It was confusing.
It was perplexing.
It was unexpected.
And it haunted the Sox in September as they missed the post season by 2 swings.

This bad start?
Please, it is helpful.

How?
First of all it clear illustrates what is wrong with the Red Sox.
What happens when you go to see the doctor?
The doctor asks "What's the problem?"
You explain the problem and the doctor tries to help fix the problem.

That is EXACTLY what is happening with the Red Sox.
What seems to be the problem?
No starting pitcher is reliable other than Jon Lester, and even if the offense comes through, the bullpen stinks.

OK, then what is the solution?

I think for all Red Sox fans, we need to take a deep breath and remind ourselves 5 things.

1) There are 159 games left in the season.
2) The Tigers are actually one of the elite teams in the game.
3) The Red Sox are probably not going to make the playoffs.
4) That isn't necessarily a bad thing.
5) We ALL told everyone on the planet Earth that we just needed one World Series title before we died. We've had 2.

It is indeed a long season and who knows? The Red Sox could go on a nice winning streak. They could be getting the bad feelings out of the way early.

But guess what?
There might not be a quick fix.
Doctor's can't always prescribe a pill and sometimes surgery is needed.
Sometimes a natural healing process needs to happen.

And sometimes it is a good thing to have some pain in the body.
Pain tells us where the problem is.

And here is the Dr. Sully Diagnosis:

I've been saying this since Spring Training. The Red Sox are 8 players short of a pennant contender.
At least 2 starting pitchers... At least 2 Relief Pitchers... A Catcher... a Shortstop... A Rightfielder... And a Third Baseman for 2013 (Youkilis should become the full time DH after Ortiz's contract expires.)

There is no way that they will fill 8 this year.
But 4 isn't out of the question.

Imagine if the Red Sox develop 4 players this year.
Let's say that the Jose Iglesias becomes the starting shortstop and fields his position well.
And Ryan Lavarnway shows he can be a decent big league catcher.

And someone like third baseman Will Middlebrooks or reliever Alex Wilson or Junichi Tazawa (who is only 26 years old) can fill holes in the team.

If that happens (which isn't as unreasonable as asking a team to climb back from an 0-3 hole with Rivera on the mound), then the Red Sox will go into the 2013 season with Youkilis, Pedroia, Gonzalez, Lester, Ellsbury, depth up the middle and a slightly deeper pitching staff. Take Ortiz and Dice-K off the books and you fill the final 4 holes and BAM!

I see the 2013 Red Sox as legit pennant contenders.

That's a healthy way to look at the season!

Not as a rebuilding season... but as a healing process.

And don't give me the nonsense that "We can not accept anything less than a Championship team!"
Since when?
When did "Now I can die in peace" become "I need a miracle daily."

The sooner we accept that we aren't a playoff team the better. It will make this year a lot more fun to watch. It will be a recovery season where we see the new great Sox team rise from the ashes.

If they DO win it all, then great!
If they DO make the playoffs, then wow! It's a bonus.

But if they have their third straight third place finish, at least we can say "At least we are heading in the right direction."

You are going to feel a little pinch.