The Nationals fascinate me... at least for now 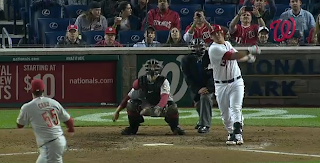 The other day I was using my At Bat MLB app on my phone. I could have listened to the Red Sox game or the Yankee game. Yet somehow I was drawn to the Nationals and the Astros game.

OK, there were some logical reasons to check that game. It was later in the game (probably the 7th or 8th) and it was a 1-0 game so it was potentially an exciting finish. And it was.

But the Red Sox are stumbling around and the Yankees so far haven't been dynamic.
A team like the Nats are, in the own way, a little more interesting.

With tonight's win against the Astros, the Nationals have won 3 straight and are 10-3.
Granted, they've played the Mets, Cubs, Reds and Astros so far. It isn't exactly the strongest part of the schedule.

But guess what? When a team beats teams they are SUPPOSED to beat, then they are laying down the foundation of a good year.

I'm sure the Mets, Cubs, Reds and Astros all looked at THEIR schedule and thought the Nationals were beatable.

Beat the teams you are supposed to beat and hold your own against the best team, and then you have a chance to have a winning club. With 10 wins already, the Nationals are more than 10% of the way to a 90+ win season.

Now keep in mind that the Phillies offense isn't exactly clicking, the Mets are coming back to Earth, the Marlins haven't blasted out of the gate and the Braves are unpredictable.

Every year there is a team that comes out of nowhere to make a playoff run.
Also every year an unlikely team gets off to a fast start and then comes crashing back to Earth (I'm looking at YOU 2011 Cleveland Indians.)

The Nats might be the latter. But they have enough pitching to send John Lannan to the minors. And they do have the potential jolt of energy that Bryce Harper's promotion could bring.

They are winning games they should win. You can't ask for much more than they have delivered.

10% of the job is done. Will they get the other 90% done?
It's early... but potentially interesting.