Baseball... PLEASE work out a stadium deal for the A's! 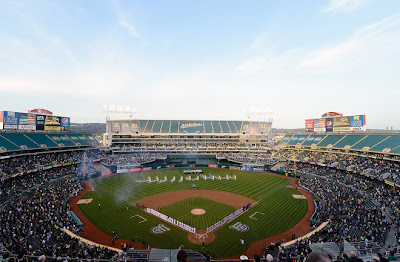 This farce of playing the A's in the awful Colosseum. (I won't even guess what the hell it is called now.)

Let San Jose build a new ballpark. Don't blather about territorial rights. The only reason the Giants have South Bay territorial rights is because 2 or 3 ownerships ago, the A's handed over the rights for free in a stupid gamble.

It didn't work and now we have this crap.
A tarped off football stadium.

This isn't the same as a team entering from a new market into the Bay Area. The A's have been there since the late 1960s. It's not like they are entering from Kansas City NOW.

This isn't the "Move a team to Washington" problem that WAS legitimate. The Orioles were THE team of Washington DC and northern Virginia. It made sense that Peter Angelos would want to keep the Expos from moving into DC. And when they finally did, he got a TV deal that favored him.

This isn't a team moving from Canada to the Potomac.
This is a team going from the East Bay to the South Bay.

Do you see the difference?
One team traveled 500 miles across an international border.
The other wants to go about 45 minutes down the 880.

And besides, how antiquated is the concept of territorial rights?
Why not haggle over "Kids peering through knotholes" rights?

I live in South Pasadena, California and I can watch every single Red Sox game.
Someone living in the apartments overlooking Wrigley Field can catch every single Colorado Rockies game. It is a different media world.

You'd think a team that owns the rights to Silicon Valley would understand how the internet works!

Work out a deal.
Have the A's cough up some money (or get Brad Pitt to show up.)
Work out a new TV deal. (The A's TV coverage couldn't be worse.)

Just get them out of that dump.

Hey Bud!
Isn't that your job as commissioner? To make sure that things happen that are for the good of the game?

The A's situation isn't good for the game.
Get to work.