My World Series picks look shaky... but I am standing by them 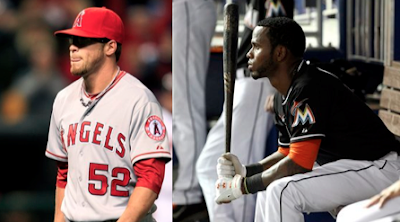 I picked the Angels and Marlins to face off in the 2012 World Series.
And no doubt if that prediction came true, it would be music to the ears of the Fox TV stars who are placed strategically around the ball park during the World Series, promoting their shows.

A trip to Disneyland and Miami would be favorable to sitting in Philadelphia or Detroit on a cold October night.

But right now neither the Angels nor the Marlins look like champions.
The Angels offense is dysfunctional with the team eating Bobby Abreu's contract to make room for Mike Trout. That's ONE way to solve the log jam of outfielders.

Meanwhile Albert Pujols looks like Jimmie Foxx at the plate and has his home run production. Keep in mind Foxx has been dead since 1967.

And the bullpen is in total disarray. When Torii Hunter starts calling out everyone including the management, you know things are bad.

Meanwhile the Marlins are as bizarre the statue in center field.

Ozzie Guillen is pissing off Miami Cubans, neither Jose Reyes nor Hanley Ramirez are hitting worth a lick, the pitching is uneven and Heath Bell has stunk.

And to pile on, they were swept by the Mets of all teams.
It is not yet May and both teams are in need of a slap in the face.

That being said, neither team should panic.
It is only accentuated because it is the beginning of the year.

If Albert Pujols had a homerless June, people would say "Man, he needs to snap out of it."
If Heath Bell blew a few saves in August, Miami fans would say "Who is Heath Bell? Is he on the Dolphins?"

There is too much talent on the team to have them not be contenders.
In fact it might be better for them to get their lousy month out of the way NOW.

Get the moments where you try to correct problems and adjust early.

Don't get swayed by early standings. Unless you think the season will end with the Nationals as the best team in the National League.