While looking up some facts for a post I am writing about Brian Cashman, I stumbled across this gem in the New York Daily News from John Harper.

He wrote it on September 7th, 2011 after Jesus Montero homered for the Yankees.

It will always be fair to wonder if Brian Cashman was right or wrong not to give in to the Mariners' demands for Cliff Lee 14 months ago and include either Ivan Nova or Eduardo Nuez along with Jesus Montero, the centerpiece of the proposed deal.

But one thing for sure: After Montero flashed the opposite-field power that has had scouts comparing him to Mike Piazza for years, hitting his first two big-league home runs at Yankee Stadium on Monday, it's starting to look like the Mariners were the real losers in that rather famous near-deal.

Instead of a Cy Young winning post season stud (up to that point) they traded him for a guy with one good first half and will miss all of 2012 and part of 2013 before he throws a single pitch for the Yankees.

Meanwhile the Mariners wound up getting him anyway AND was able to deal Lee for prospects. Yeah, Justin Smoak has been a disappointment. But pitcher Blake Beavan has shown promise. 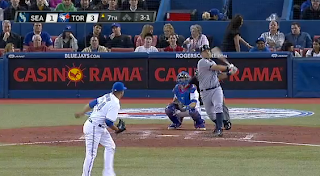 In a way, Montero's production this season is almost irrelevant in evaluating this trade in the short term.
Listening to the Yankee broadcast yesterday, Suzyn Waldman stuck to the company talking points saying that Montero hasn't been tearing up Seattle, creating a false equivalency that the trade might be equally bad for both teams. (This was before Montero crushed a Piazza like homer last night.)

Even if Montero finishes with a .100 OPS and winds up vomiting into Ichiro's cap during a game, this trade is still disastrous in the short term. Montero's Yankee role and position was "Prime Trade Chip."

He was the bait to fill the inevitable pitching holes and needed to be spent wisely.

And I think the Mariners no longer feel like the loser of that deal.