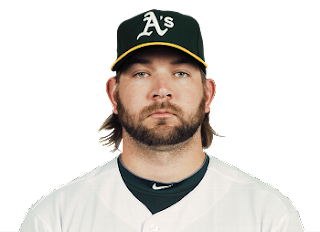 My fellow baseball fans and readers of the blog. Let us tip our cap to Oakland reliever Andrew Carignan. And I will explain why.

The Oakland A's and the Kansas City Royals went into extra innings today. With a Kansas City runner on first and 2 outs in the top of the 12th, Oakland manager Bob Melvin brought in Andrew Carignan to relieve Jordan Norberto, who had gone 1 2/3 innings.

Royals slugger Billy Butler hit one into the left field corner and Eric Hosmer, taking advantage of Coco Crisp's arm, raced all the way home from first. The Royals took a 4-3 lead.

But after a one out error in the bottom of the 12th, Royals reliever Jonathan Broxton totally lost his control. He walked two batters and hit two more. The last hit batsman was Johnny Gomes to bring home the winning run.

It was his first big league victory.
And that is an achievement.

The New London Connecticut native was a star pitcher for the North Carolina Tar Heels and drafted by Oakland in the 5th round of the 2007 draft. He was drafted ahead of Tampa's Matt Moore and Arizona's Josh Collmenter, who each won a game in the 2011 post season.

Carignan pitched well his first few years in the minors, but then injuries took their toll. At age 22, he pitched only 2 innings in the 2009 season. At age 23, he had a poor 2010 season at Single A Stockton and threw only 33 innings.

A lot of pitchers get derailed by injuries and ineffectiveness. A lot of pitchers never get past that Single A level. The leap from Single A to Double A must be astronomical. And the jump to Triple A and finally to the majors must have seemed unattainable when a pitcher him his mid 20s couldn't stay healthy or get Single A batters out.

But in 2011, he jumped four levels, starting at Single A Stockton, then being promoted first to Double Midland and Triple A Sacramento before making his big league debut on September 2, 2011.

He made the big league squad out of spring training and lost the season opener in Tokyo out of the pen.

Today, he got his first win.

I wonder how many times when he was struggling at Single A ball he thought "It's not going to happen."

He must have had moments where he thought "I am not going to make it to the big leagues. I will never get to experience a victory in the majors. The injuries are too much. The competition is too strong. There are too many new young pitchers taking my place."

And how many of us can't even comprehend being a real Major Leaguer, let alone be in a position where you have one in the win column.

Congratulations Andrew Carignan.
Many other people would have folded up the tent.

I hope I have a little bit of Andrew Carignan in me as well.