Jamie Moyer is cooler than you 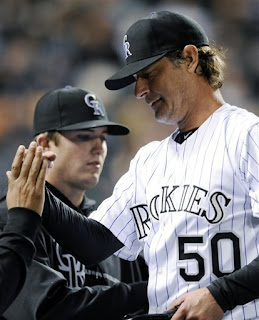 At age 49 years and 150 day, Jamie Moyer won a major league baseball game.
He pushed former Dodger Jack Quinn aside and set the record for oldest pitcher to win a game. (Quinn pitched one more season after getting that last win but couldn't chalk up another W!)

So caps off to Jamie Moyer, an All Star and World Series champion and millionaire many times over.

I've written two pieces about Moyer that I want to dust off in this momentous occasion.

This January I wrote a 25 Man Roster consisting only of players who were born after Jamie Moyer's big league debut on June 16, 1986. It's not a bad roster with Buster Posey, Elvis Andrus, Justin Upton and Clayton Kershaw.

And in 2010, I wondered about the beginning of Jamie Moyer's career. Had he just been mediocre in his 20s, we'd be talking about him for the Hall of Fame.

Congrats Mr. Moyer. May you break your own record many times over.