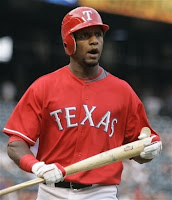 On May 30th, the Rangers beat up the A's 14-1.
They had a 5 1/2 game lead in the West.
They had the best record in the American League.
Now everyone knew that June would bring about some hard tests for the Rangers as the heat in Texas rises to somewhere between Ecuador and Arrakis, home of the Spice.
Well how did the Rangers do in their big test month?
Worse than my worst Pre Calculus test.
The Rangers have gone 10-15 since that game against the A's and fell out of first place.
Tonight was the first of the crucial tests against the Los Angeles California Angels of Anaheim in Orange County off of the I-5.
And if I turned in that test to my Pre Calculus teacher Mrs. Swain, she would just write on it "See Me."
2 1/2 games.
It doesn't seem like a big lead, especially with 87 games left. But they let the Angels back in it.
They were floundering with injuries, slumping hitters and tragedy. They were at .500 on June 11th.
Now they are hitting their stride and the Rangers may slip all the way to third if the Mariners keep winning.
Can they just blast the airconditioning in Arlington? Because the last time I saw something shrivel in the heat like this to become something small and fragile, I was playing with Shrinky Dinks!
Posted by Sully at 10:38 PM