Tom Glavine should have listened to me!!!! 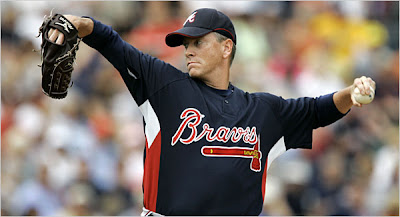 Sure the Braves did a d-bag move by cutting Tom Glavine.

You have a 300 game winner, former World Series MVP and 2 time Cy Young Award winner working his butt off to make it back to the bigs, and the Braves cut him in A ball. A Hall of Famer's career ends with the Rome Braves.
The Braves are a .500 team and they have their eyes on another Tom, top prospect Tommy Hanson.
But why couldn't the Braves bring him up for one game?
And obviously someone is going to take a chance with Glavine. Maybe even division rival Philadelphia.
Seriously Braves? You are going to have Maddux, Smoltz AND Glavine all retire with other teams?
But here's where I am going to side with the Braves a little bit.
The Braves had no obligation to give Tom Glavine another victory lap.
They already DID!
Remember last year? He returned to Atlanta and made 8 million clams and won 2 games.
There was nothing left on his Hall of Fame resume after last year:
300 wins? - CHECK
Cy Young Award - CHECK CHECK
World Series MVP - CHECK
Greatness over the long haul? 6 top three Cy Young finishes and 22 big league seasons are worth a CHECK!
Returning to where it all began? CHECK!
So what was he doing coming back?
Exactly how many victory laps will Glavine run?
Last off season I urged Pedro, Schilling, Smoltz, Maddux and Glavine to all hang them up.
None of them had anything left to prove and should have pulled a Mike Mussina and walk away.
Schilling and Maddux complied. (I like to think my post made their decision easier.)
Smoltz looks like he might help the Red Sox, but who knows if it will be for anything more than his prescience.
Pedro is still out there looking for work and now Glavine's last images on the mound could be with Rome!
If Tom listened to me, he would have finished his career a Brave and there would be no ill will today.
Allllllways listen to Sully.
I'm always right.
Except when I am incredibly wrong.
Posted by Sully at 8:35 AM