Hey Pirates... Why Even Bother? 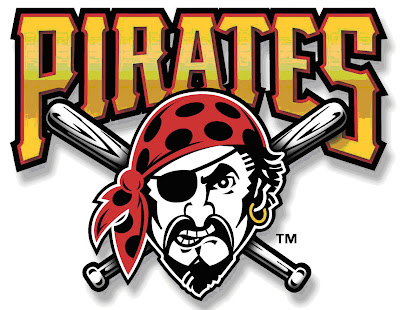 And so it continues for the Pirates...
June has barely begun and the flag being raised isn't the Jolly Roger but the white flag of surrender.
Even though the Pirates are only 4 games under .500, the management has declared 1/3 of the season is enough... start dumping bodies.
And they did it the best way they know how:
Trade young players (like Nate McLouth) with affordable long term contracts for a bunch of young guys you've never heard of.
OK, fine I've heard of Gorkys Hernandez because he was a big prospect for the Tigers and the Braves... and no doubt in a few years he'll be a star and the Pirates will trade him for some prospects.
So it is 17 years and counting since the Pirates put even a .500 team on the field.
And I have written about how there is no excuse for this nearly 2 decade long slump.
Don't talk to me about payroll.
Teams like the A's, Twins, Marlins and last year's Rays have made the post season with rock bottom payrolls.
And none of those teams did that in a tax payer subsidized ballpark. They did it in parks either designed for football or in the case of Tampa, a Mad Max movie.
The Marlins had a winning season with a $25 million payroll!
I'm not talking about putting a World Series winner on the field... just a team that would be interesting!
And the biggest reason for this disgraceful 17 year drought has nothing to do with free agency.
It has to do with the organization and the draft.
Since Sid Bream slid across the plate to end the 1992 NLCS the Pirates have had one of the top 11 picks in the draft 13 times.
Let's look at those top 11 picks:
In 1994 they picked shortstop Mark Farris, who never made it past AA ball.
Nomar Garciaparra, Jason Varitek, Troy Glaus and Aaron Boone were available.
In 1995 they picked Chad Hermansen, who played 3 1/2 uneventful seasons with the Pirates.
Matt Morris, Roy Halladay and Sean Casey were available.
In 1996, they used the #1 pick over all on Kris Benson, who is best known for having a hot but crazy wife.
Granted it was a weak draft, but Braden Looper, Gil Meche and Jimmy Rollins were all drafted that year.
In 1997, they picked J. J. Davis, who fizzled after three uneventful seasons in Pittsburgh.
Jon Garland, Lance Berkman and Chase Utley were all there for the picking.
In 1999, they picked Bobby Bradley, a pitcher who never made it to the big leagues.
Barry Zito, Ben Sheets, Brett Myers, Alex Rios and Carl Crawford were all available.
In 2001 they picked John Van Benschoten, who has been an ineffective pitcher for the past three seasons.
David Wright, Casey Kotchman and Danny Haren were picked later.
In 2002 they had the #1 pick again and drafted Bryan Bullington, who pitched 6 games in a Pirates uniform.
B. J. Upton, Zack Greinke, Prince Fielder, Jeff Francis, Cole Hamels, Matt Cain and Scott Kazmir were all drafted later.
In 2003, they drafted Paul Maholm (Hey! A Decent pick!)
Maybe even better than Carlos Quentin, Chad Billingsley and Chad Cordero.
In 2004, they drafted catcher Neil Walker who never made it.
Jered Weaver went next... Stephen Drew, Dustin Pedroia, Yovani Gallardo and Huston Street went later.
In 2005, they drafted Andrew McCutchen, who makes his big league debut today.
Meanwhile Jay Bruce, Jacoby Ellsbury and Matt Garza have already contributed on the big league level.
In 2006, the Pirates drafted Brad Lincon... the only one of the top 7 picks to not appear in a big league game as of this writing.
Meanwhile Tim Lincecum was available. He already has a Cy Young to polish.
It's a little too early to judge 2007 and 2008... but do you see a pattern developing here?
Either the scouts are drafting lousy players or the farm system is devoid of any decent coaches.
No matter what the answer is, it is a disgrace!
Yes Pittsburgh fans can be subdued with the fact that the Steelers are the World Champions and the Penguins are in the Finals. 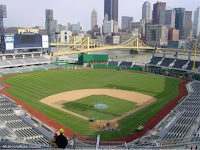 But guess what? Using my "You don't start following a team day to day until you are 8 years old, then there are 25 year old Pittsburgh fans who have never seen the Pirates play .500 ball.
Some of them are having kids. You think they have ANY memories to share with their kids about Pirates ball?
What is the greatest moment in PNC Park?
I read that there is a soccer league in Italy that makes the bottom three teams go to the minor leagues and promotes the top three minor league teams to the majors.
That's a novel concept for the Pirates.
You treat the time like a minor league team? Then get you'll get sent to the farm!