It's Official! There are NO advanced scouts for the Yankees! 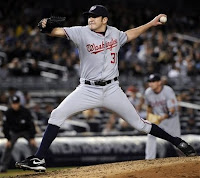 How can they have an advance scouting department?

3 of their last 4 games they have been stymied by pitchers they have never seen.

The immortal Fernando Nieve… the guy who couldn’t keep a spot on the last place Houston Astros… making his first start since 2006… throws 6 2/3 innings of 4 hit ball in Yankee Stadium for the win.

If the rain lets up today, someone named Craig Stammen will pitch against the Yankees this afternoon.

Seriously, nobody can look me in the eye and say “Yes there are advanced scouts doing their job for the Yankees.”

There might be guys with expense accounts going to the games, but I they aren’t paying attention.

How do I get that job?

I’d love to be paid to fly to games and then do nothing to help the Yankees!