WAIT A SECOND! The Giants are a playoff team???? 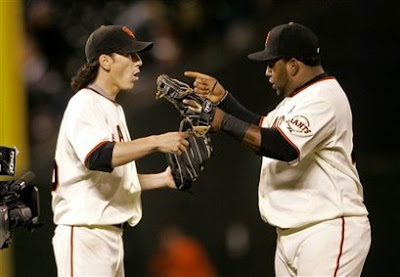 There is a scene in the book version of Jurassic Park when one of the characters thinks the dinosaurs are breeding. The park supervisors claim they are monitoring the situation and the number of dinosaurs has remained constant.
However they find out that the computers are simply checking to see if the population decreased instead of increased. When they checked a new screen, they were stunned to find there were many MORE dinosaurs than they thought.
Why am I thinking of this scene from the book?
I was reminded of it today regarding the San Francisco Giants.
My dad has been e mailing me and talking up his Giants.
"They are looking good! How about my Giants?"
And I'd nod and say "Hey! They are above .500!" but not give them much thought.
Clearly they are not a playoff team. I'm living a quick drive down the 110 from Dodger Stadium. I see a lot of the Dodgers. They are running away with the NL West. A winning season would be a nice step in the right direction for the Giants, but they aren't a playoff contender yet.
Then today, I looked at the standings. As always, they are listed by divisions with the Giants a distant 7 games back of Los Angeles.
Then, for probably the first time this season, I clicked on the Wild Card Standings.
And it was exactly like that scene from the book, Jurassic Park.
The Giants weren't just having a winning season.
They are tied for a playoff spot!
I know it is too early to say "If the playoffs started today" but it isn't THAT early!
It's not April.
It's mid June and before you know it, it will be July and the trade deadline will be looming.
And if the playoffs started today, the Giants would have a one game playoff with the Cardinals.
And the Giants would start someone like Tim Lincecum or Matt Cain...
And with Barry Zito pitching better and Randy Johnson maybe having a little in the tank...
Who knows?
There may be more raptors than we thought.
Why the hell didn't Spielberg put that part in the movie? That was the best scene in the book!
(Yeah Sully... I'm sure when the movie became the biggest hit of all time, Spielberg was kicking himself for making that change!)
Posted by Sully at 9:12 AM