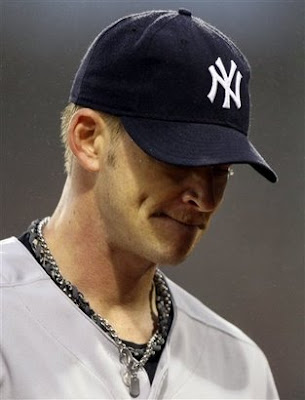 Take a good look at this face, Yankee fans.
He's going to be a member of the 2013 New York Yankees!

I would say that I love the idea of him pitching every 5 days for the next 4 1/2 seasons, but he's going to have an injury or 8 over the next few years. He has always gone down to injuries, except when he could opt out of his contract.
And now it looks like he belongs on the Jeff Weaver/Jaret Wright scrap heap.
When the Yankees bring in former star pitchers from the Marlins, it's not pretty.
I bet you can get a Kevin Brown or Carl Pavano jersey pretty cheap on eBay.
Better start selling those Burnett jerseys too.
Yeah, this is a snarky post... but who could have predicted this was going to be a bust signing.
Hmmmm.... I wonder.
Posted by Sully at 10:59 PM