It's like the Red Sox made a great trade 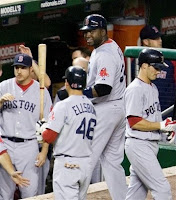 The Red Sox had a rotten DH going into the Yankees series on June 9.

His very name in the lineup made Red Sox fans squirm.

Then they swapped that DH for a new DH...

Man, that Theo is good!